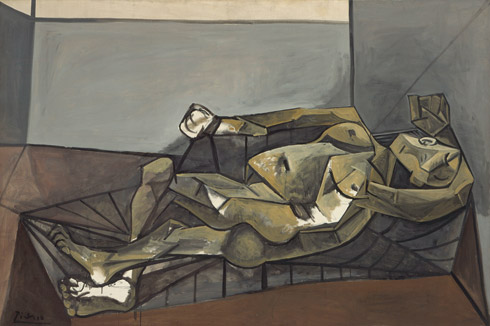 Listen to an excerpt about this work from the audio tour.

The reclining female nude has been represented in Western art since the 15th century, pioneered by the Venetian painter Giorgione during the High Renaissance and repurposed by artists such as Titian, Francisco de Goya, Jean-Auguste-Dominique Ingres, Eugène Delacroix, and Édouard Manet, among many others. Most often depicting a goddess or a princess evoking a mythological subject, the languorous woman is usually seen close-up in a slumber or gazing straight at the viewer as her naked body consumes the entire width of the canvas.

Picasso was no exception to this tradition, but it is evident that he turned to Goya, namely to Goya’s The Nude Maja, while working on Reclining Nude (1942). Painted from 1797 to 1800, The Nude Maja features a subject whose identity remains unknown, though it is often said that the model may have been the Duchess of Alba or else the mistress of the Duke of Alcudia. Not interpreted to be allegorical or mythological, the painting was considered at the time to be obscene and overtly explicit in its sexuality. In 1808, the painting was seized by order of King Ferdinand VII of Spain, only to be confiscated in 1813, during the Spanish Inquisition, and did not enter the collection of the Museo Nacional del Prado in Madrid until 1910.

While there are certainly formal affinities between Picasso and Goya, their art is also inseparable from their profound personal concerns. Both images were created to exorcise fears stemming from their relationships with women. Over the course of his career, Picasso’s illustrations of women underwent a process of continual transformation, from maternal figures and erotic models to threatening beings. In Goya’s The Nude Maja, Picasso found a model who was both attractive and powerful, whose strength and allure lay in her awareness of her role as the object of men’s desire and contemplation. Lying back with a nonchalant posture, Picasso’s Reclining Nude is composed of dark fragmented planes. The gender of the figure, however, remains somewhat ambiguous and virile in appearance, contrary to so many of Picasso’s nudes. The breasts are most certainly feminine, but the overly muscular and athletic body, buttocks, short hair, and angular features resonate in a rather masculine fashion. The flat, minimal palette used for the background, composed of black, white, and gray, feels particularly stark and confined. This may be due to the fact that Picasso was living in Nazi-occupied Paris at the time, a parallel nod to the Napoleonic invasions in Goya’s Spain. Indeed, instead of exploring beauty, harmony, and eroticism, Reclining Nude conveys pain and tension, of being imprisoned in one’s own bleak space.